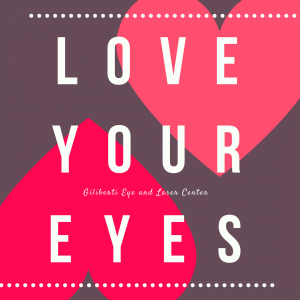 Seniors are at heightened risk for age-related macular degeneration, the leading cause of blindness among older Americans. The disease damages central vision, limiting a person’s ability to read and recognize faces. Approximately 2.1 million Americans had AMD as of 2010. This number is expected to double to more than 5.4 million by 2050. Meanwhile, fewer people are aware of the disease compared to other eye diseases such as cataracts and glaucoma.
To help raise awareness of AMD as Valentine’s Day approaches, Giliberti Eye and Laser Center and the American Academy of Ophthalmology are reminding seniors that their eyes need love, too! There are steps they can take to take better care of their eyes and protect themselves from AMD-related blindness.

Here are five eye-loving tips from the Academy and the facts behind the advice: